Red marble mantelpiece topped by his Regule sculpture signed Victor Rousseau (1865 - 1954).
The sculpture shows a young man hugging a young woman undecided with his left arm while offering him a wedding ring.
The geometrically cut clock features a dial in its center with Arabic numerals and signed "Lorient - Brest - Nantes".
Its mechanism was revised in 2002.
It rests on 4 feet in pinkish bronze adorned with foliage.
Period: late nineteenth - early twentieth.

In a perfect state. Revised mechanism.

Victor Rousseau (1865 - 1954): Born in Feluy on December 15, 1865 and died in Forest on March 17, 1954, is a Walloon sculptor of Belgian nationality, from a line of stonecutters.
He begins to carve the stone from 11 years. He collaborates with the construction site of the Brussels Courthouse, under the direction of Joseph Poelaert, and his attachment to this profession at the beginning of his life is reminiscent of Auguste Rodin. He then joined the sculptor Georges Houtstont's studio and took courses at the Royal Academy of Fine Arts in Brussels. 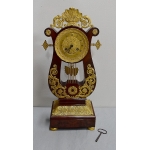 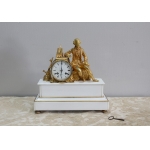 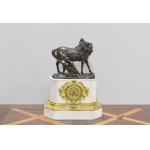 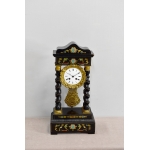 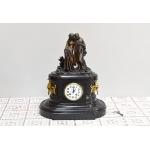 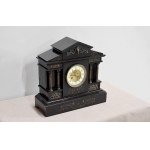 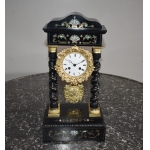 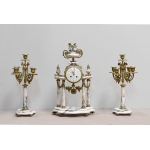 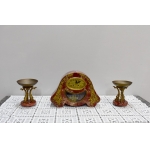 
Go to the gallery Antiquites Lecomte